Ulster Bank is a leading retail and commercial bank in the Republic of Ireland and Northern Ireland. It is a wholly-owned subsidiary of the Royal Bank of Scotland. 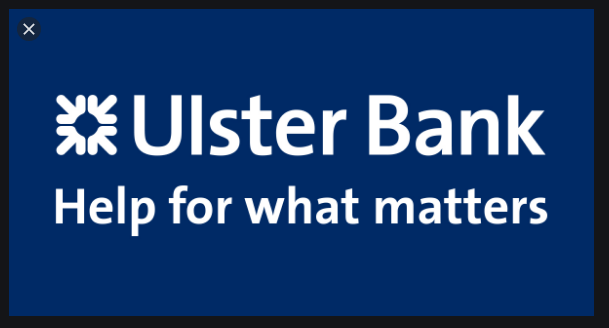 Ulster Bank was established in 1836. The bank opened for business in Waring Street, Belfast, in 1836 as Ulster Banking Corporation. The bank grew and within a year had 9 branches in Ulster. By 1867, the bank was registered as an Unlimited Liability Company.

The bank kept growing and opened more branches in Ulster and outside Ulster. The growth of the bank prompted the adoption of limited liability, becoming Ulster Bank Ltd, in 1883.

During the First World War, the bank provided gold to the government and had to employ women for the first time in 1915 because a lot of men that would have served as staff were enlisted in the army.

In 1917, Ulster Bank was taken over by London County and Westminster Bank. The bank retained its name and continued to operate independently. The bank growth was stunted by the world depression and the second world war that started soon after the depression.

In 1961 the management and capital of Ulster Bank were reorganized and a new board with defined functions and powers was appointed. The bank became the first Irish bank to introduce cash dispensers, open airport branches with extended trading hours and offer an early cheque guarantee card.

In 2000, National Westminster Bank was acquired by The Royal Bank of Scotland Group. Ulster Bank, however, continued to operate independently. The bank in a bid to simplify its corporate structure transferred its banking business in the Republic of Ireland to Ulster Bank Ireland Limited in 2001. This was in accordance with the Central Bank Act 1971.

Products and Services of Ulster Bank